American Eagle Outfitters (AEO) is an American clothing and accessories retailer with close to 1,000 stores, headquartered in Pittsburgh, Pennsylvania. It was founded in 1977 by brothers Jerry and Mark Silverman. The brand targets male and female college students, although older adults wear the brand. They operate in more than a dozen countries.

Probably with good intentions AEO launched an ad campaign in 2007 which used negative forms of gay stereotyping, in the form of a 12 episode web “sitcom” It’s a Mall World. The episodes appeared on their own website and are also premiered each Wednesday on TV during MTV’s Real World: Sydney. When a gay protagonist was introduced, he was a “mincing, lisping, pathetic portrayal of a gay man. One wonders how much the retail outlet paid for a marketing campaign that so effectively alienates their gay clientele?” – said NewNowNext. 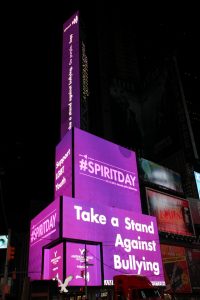 For a number of years GLAAD complimented AE for going purple to raise awareness about bullying against LGBT youth. The billboard atop the retailer’s flagship Times Square store, a “four-level “spectacular”, had been including a Spirit Day message to go purple since the beginning of October.

AEO showed off their spirit on the West Coast, too. The store in San Francisco’s legendary Market Street had Spirit Day-themed window displays.

AE was “supporting partner”, along with Barilla, 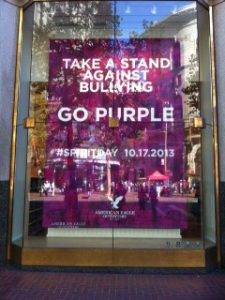 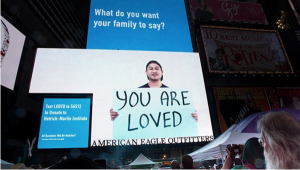 A sign of support to New York’s Hetrick-Martin Institute, an advocacy group for at-risk gay youth, marked Gay Pride Month in about as prominent a way possible, in June 2015 (the ‘SCOTUS month’): with a video on the Times Square billboard showcasing the LGBTQ teens it serves. AEO was donating one minute of time every hour on its 15,000 square feet of LED screens. The campaign encouraged youth and supporters to share empowering messages with the hashtag #empowerLGBTQyouth. American Eagle has been a longtime supporter of the nonprofit.

In 2016 American Eagle Outfitters was the proud a supporter of Pittsburgh Pride (where their HQ are) for the fourth year. They designed limited edition “Love is Love” t-shirts, underwear and temporary tattoos that were sold in select stores and online. 100% of sales were donated to InterPride.

Their website featured a Love Is Love section with a number of branded Pride and Rainbow items, with the heading “Love Anyone, Accept Anyone” and their general hasthtag #WeAllCan. 100% of the sales from the 2017 Pride Collection benefitted It Gets Better. The collection comprised of t-shirts, tanktops, boxers, briefs and accessories featuring rainbows, the word ‘love,’ and the hashtag #WeAllCan. It was available online and at select stores in the US, Canada and Israel.

In 24 select American Eagle Outfitters stores, customers had the opportunity to share their pride by taking photos in front of our Pride banner and have their photos uploaded to the company’s Times Square billboards during the NYC Pride March.

In addition to launching the partnership collection, AEO sponsored Pride Pittsburgh, participated in the Pittsburgh Equality March, and it hosted a #WeAllCan float in the New York City Pride March. 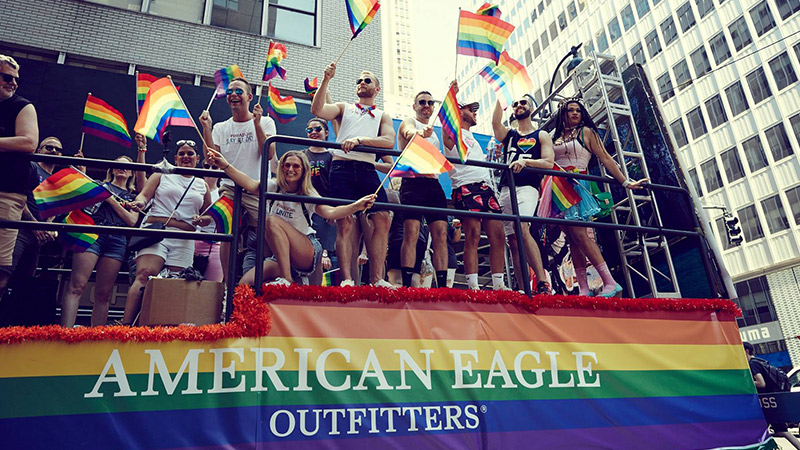 In 2018 AEO invited the world to be a part of their float at NYC Pride through Facebook live:more than 90,000 people tuned in. They partnered with micro-influencers and LGBT+ activists to customize #WeAllCan tees with messaging about what Pride meant to them. Influencers selected included Orion Carloto, a writer and poet with nearly 500,000 Instagram followers and Max Emerson, an actor/model with 792,000 Instagram followers, along with a few others.

The 2019 American Eagle Pride campaign raised more than $1.2 million for It Gets Better through the sales of Pride merchandise and customer donations at the register.