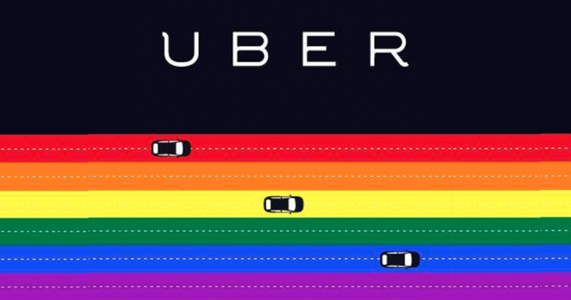 Uber Technologies is a peer-to-peer ridesharing, food delivery, and transportation network company headquartered in San Francisco, with operations in 633 cities worldwide. Its platforms can be accessed via its websites and mobile apps. The name “Uber” is a reference to the colloquial word “uber”, meaning “topmost” or “super”. Uber has been a pioneer in the sharing economy, so much so that the changes in industries as a result of it have been referred to as Uberisation.

Their website says: “Our goal is to promote LGBTQ inclusion and diversity at Uber. At Uber, we believe the world is brighter, more colorful, more productive, more creative, and happier when each of us can be authentic to who we are. UberPride works to build a workplace and community — within Uber and across our cities — in which LGBTQ individuals feel welcome, fiercely supported, and empowered to be their best selves.” All this is realized through recruitment, community outreach and training.

For the past years, they earned a top score of 100 on the Human Rights Campaign Foundation’s Corporate Equality Index. They also joined the HRC’s Business Coalition for the Equality Act and supported federal legislation in the U.S. that would ensure equal protections for members of the LGBTQ community in the workplace. Finally, they publicly opposed harmful initiatives such as the federal transgender bathroom directive, the 2015 Indiana religious freedom bill, and North Carolina House Bill 2.

The UberPride Employee Resource Group was set up to facilitate an LGBTQ platform.

Already in 2015, before the same-sex marriage was legal in all states, they offered UberWEDDING in California. Interested parties could  win a complete wedding plus honeymoon. Uber said: “We’re thankful to be based in San Francisco, a city that recognizes love doesn’t have to look any certain way. In honor of Pride week, we’re celebrating the inclusive idea that love is love with something that lasts a lifetime.” Eight couples, straight and gay, were rewarded with transport, a notary, vows if needed, flowers, champagne, a gift bag, and a honeymoon (sponsored by HotelTonight and Alaska Airlines). 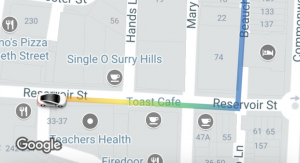 Throughout all of June 2015, Uber showed its support for Pride Month with a simple-but-smart marketing hack – attaching an image of the rainbow flag to the virtual cars on its mobile app. The move generated little buzz until the SCOTUS verdict, when significantly more people started posting pictures of the Uber maps in their social media streams. 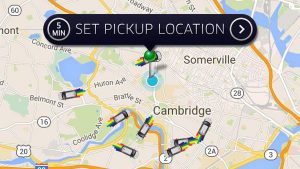 Friday that the Supreme Court made same-sex marriage legal in all states. But, as AdWeek noted, while the small initiative actually started a few weeks before, it was still worth noting.

parade weekends in San Francisco, Seattle, Los Angeles, Portland and San Diego. The campaign was called #RideWithPride. During specific hours in some cities, Uber users could select “PRIDE” from the app’s list of ride options to hail a car equipped with a video camera and postcards so that they could record and write messages of hope for LGBT youth. The entire fare was donated to It Gets Better. “Uber is committed to diversity and inclusion and we’re thrilled to be partnering with an organization dedicated to spreading a message of hope. We’re excited to celebrate Pride Month with you, and we hope you will join us as we ride with pride. Thank you for making a difference.”

They did the same thing more than once in the U.K. to celebrate Pride, in the US for Pride Month and again to support the vote in favor of same sex marriage in Australia, late 2017. The app told users, “Uber passionately supports equal rights for everyone in our community. We support marriage equality and stand with the LGBTI community in cities around the world. Every vote is important. Ensure your vote is heard.” The app then linked to the Australian Electoral Commission website to enroll or check enrolment. They also encouraged their drivers to enroll in the plebiscite.

A year earlier, Uber in Australia was confronted with complaints from a lesbian couple, who was harassed by a driver (who was subsequently sacked) and a gay passenger who reported he was kicked out of an Uber for kissing his male friend. Similar incidents were recorded in London, in San Francisco during Pride and more recently in Houston, where a couple was dropped off along the highway after a kiss. 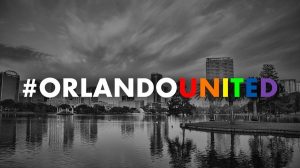 After the 2016 shooting in Orlando, Uber offered free rides – two rides of $20 – to a selection of LGBT spots including bars, community centers and museums in solidarity with the community, in dozens of cities across the U.S., such as New York City’s Stonewall Inn. They also gave free rides to family of the 49 people who were shot and killed in Orlando. 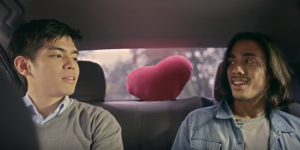 When the new carpooling service UberPool was introduced in 2016, they released an advertisement with an adorable surprise at the end. The campaign retold stories from Uber users about their experiences with the app. Passenger AJ Tabangay from the Philippines was the first to have his story told, recounting carpooling with his long-time crush. Tabangay’s tweets about sharing a car with his crush were picked up by Uber and inspired the new campaign. The actual tweets were shown in the video.

Another video for UberPool comes from Singapore: it highlights the country’s diversity, including a gay man who ‘comes out’ to the older male fellow passenger.